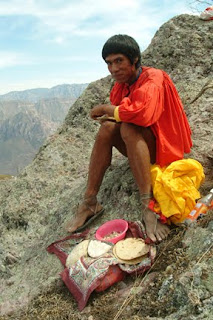 My ultrarunning friend and CNN reporter Ashley Fantz in Atlanta did a nice piece with Chris McDougall the author of “Born to Run” on the problems that shoes create for our feet. Unlike many of the running stories about barefoot running and Vibram Five Fingers, this piece actually had some images of the Tarahumara tribal ultrarunners in Mexico and their custom made sandals (basically bare budget VFFs) along with their absolutely beautiful and vibrant clothing…and functional I might add.

Oh…and one of the key findings on why they can run so much without injury? They enJOY running. :o)

http://www.caballoblanco.com/ (Coppyer Canyon Ultra Marathon Info & Links to Tarahumara)
See my other blogpost on Foot Fitness
Once again...in Foot Fitness, Coach RJ!
Posted by Coach RJ at 9:51 AM No comments: 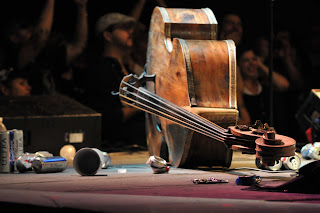 I took this shot @ Drive Invasion 2008 in Atlanta after The Legendary Shack Shakers left the stage amidst a literal storm of Pabst Blue Ribbon beer and other flying objects. I was back stage on state left shooting towards the crowd. I like this shot because even though it's "digital" it reminds me of the warm glow of Kodachrome 64. I rarely use artificial strobe lights when shooting concerts.
This was taken with available light at ISO 1600, 1/60 second, F/5, on full manual setting.
I just watched a news special about Kodachrome film. There is only ONE lab in the world that still processes this kind of film...yes I said FILM! Not a digital chip but FILM!
I grew up with Kodachrome as my father Ron Sr. recorded our lives through the lens of his old Argus C3 35mm rangefinder camera. Film of choice? Kodachrome 64. Our family has thousands of slides. When I went out on my own, I continued to shoot Kodachrome for family events. I too have thousands of slides.
In December of 2010, the last lab on the planet will stop developing Kodachrome film. The end of an era Comrades. Until the invention of Kodachrome in the 1930s, the only way you could have a "color" image of yourself was to have a painting created. With Kodachrome, the common man could have a color image.
Even though my full-time gig is Corporate Wellness, I'm also a member of the Professional Photographers of America and still do quite a bit of photography especially in the music business....allow me to flashback for a moment...
The good thing about learning to shoot with film is that I still shoot like I'm shooting film. What does this mean? I have a lot sharper eye for composition, subject, light, and subject energy than many of the new photographers. With digital, you can shoot thousands of images in one setting. With film, you had to be a lot more selective, patient, and basically much more skilled at your craft. Film capacity? 36 exposures per roll. At a rock concert back in the day, I'd shoot around 4-6 rolls of film. Today with my digital Nikon, I'll shoot around 250 or so. Slightly more, but I'm still conservative and selective. I think this makes me a better photographer. It's not quantity even though if you shoot enough eventually you'll probably get some great photographs--it's more about QUALITY. It's also easier to go through a few hundred photos than a few thousand when thinking of editing and print selection.
Anyway...just some random thoughts from an old school photographer that grew up with Kodachrome 64. -RJ
Posted by Coach RJ at 9:51 AM No comments:

If you appreciate corporate processes like RCA, Six Sigma, and LEAN, you might enjoy this post by corporate speaker and process trainer Mike Micklewright. Mike had foot problems and decided to use RCA to start asking his doctor the “Whys.” After about three whys, his doctor refused to participate—so he found another doctor that would keep answering the whys until he finally got to the root cause of his foot pain…and once again…it was a lack of foot fitness! All the conventional treatments were not getting to his root cause failure.

His introduction, explores why we don’t use RCA for health issues at home. Since RCA works so well to optimize performance at work, why don’t we use it more at home? Good point Mike!

*By the way, I too have ripped out my own orthotics and fixed MY OWN foot pain by increasing the fitness of my foot which then enhanced the mobility of my ankle. All the podiatrists, orthotics, and cortisone shots never fixed the root cause failure of my foot which was weakness. Want less foot, ankle, knee, and back pain? Improve foot fitness which includes having optimal “mobility” and functional “stability”! --Coach RJ

Mike Micklewright is president of QualityQuest Inc., a Chicago-based consulting, training, and facilitation company specializing in lean, ISO 9001, ISO/TS 16949, Six Sigma, and their integration. Micklewright is an ASQ-certified Six Sigma Black Belt, quality auditor, quality engineer, and quality manager. He holds a degree in general engineering from the University of Illinois and has worked in design, manufacturing, and quality engineering for the Saturn Corp. of General Motors and SeaquistPerfect Dispensing. Micklewright is a sought-after speaker and has had many articles published.