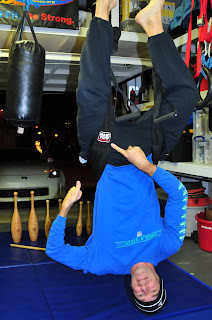 RJ "Hanging Out" with new HANGTUFF by Agelesstrength.com
At last! I got my HANGTUFF from good friend Richard "Army" Maguire of Agelesstrength.com!  This is the very first HANGTUFF sold to anyone--I am honored to have it and use it.  Army is a good friend of mine--one that I trust both personally and professionally.  He is also mentoring me on the Indian Clubs and fighting sticks which are two more topics of future discussion, but today, my focus is his new HANGTUFF!
So what is the HANGTUFF?  It's a very simple yet effective suspension trainer.  It can do anything the other suspension trainers can do (many are available now in different forms), but it's a lot faster at some of these exercises--suspended push ups, flys, rows, core work, pull ups, and more.  For now, I'm just focusing on my low back.
I've developed some nagging low back pain.  I've tried everything--including all the stuff I use to fix nearly everyone else's back pain.  I've been very successful helping others with back pain, yet I'm struggling with my own! Oh I've tried it all--less work, more work, the same work, joint mobility, kettlebell correctives like the windmill, Turkish Get Up, arm bar, biofoam roller, trigger point release balls, body weight exercises.  Nothing "bad" about the above--it just has not worked for my own back issues that well.  Maybe it's all just me--who knows.  All I know is how I feel.


Some of the above makes my back feel "kind of sort of" better--I'll be sharing all this with everyone very soon by the way--but with the exception to just a few, nothing gave me immediate relief or led me to believe this is really something significant for "my" own back issue.  After just four minutes hanging upside down on Army's HANGTUFF, my back pain was nearly GONE.  Is my back healed from a few minutes of inversion on the HANGTUFF?  No.  I would be lying if I said otherwise.  I have more work to do, more experimentation, more endurance and discipline with certain tools and methods, but I can tell you straight up and NO BS, that the HANGTUFF is going to part of this solution and a most likely daily part of my routine.  The HANGTUFF will stay in my "permanent" bag of tools for serious fitness and health--I don't roll over time with anything less by the way.

Yeah...we can talk "root cause" and whether or not the inversion is really dealing with the cause of my back pain, but I'm here to tell you, when your back is a pain in the arse, you'll gladly take "natural" pain relief and like it!  I sit too much like most people!  In my car driving at times over 3,000 miles per month, at the computer (like now!), in meetings, etc.  All this sitting might not be the actual cause, but it surely makes things worse.


I've had guys tell me for years that one of the best things they did to help back pain was hanging or inversion, and as long as they did inversion, their backs were just fine.  The upside down "inversion" helps restore space between your joints without the compression of gravity pushing down--just this alone can alleviate some nerve pain pronto.  Historically, there have been all kinds of things from inversion boots to standing table things that flip you upside down, but often this equipment has been too bulky or too hard to use for most people.  I found once Army showed me the set up, it was quite easy to find my way with it.  The HANGTUFF is simple--like me.  I like that about it.


I talked to Army Maguire about the construction and design.  He has only used high-quality materials--from foam to webbing to even the thread that holds it together--very high quality.  I felt safe hanging inverted on the HANGTUFF which is more than I can say about a lot of equipment I've seen and tried over the years.


﻿
The HANGTUFF is just now going into production.  If you're interested in having one, contact Richard "Army" Maguire at Agelesstrength in Los Angeles.  Army has another new product out too that I'm using called the "Chubby" strike bag.  Great for punching, Filipino fighting sticks, hand conditioning, etc. and small enough to be portable.  Really a versatile bag, and again like all of Army's work, it is a VERY high-quality product.  All the links are below including more photos of me hangin' on Army's new HANGTUFF.

I'll will be doing more photos on the actual "fitness" exercises you can do on the HANGTUFF soon along with some video as well.  I'll also be interviewing Army Maguire soon for The Lean Berets too as he and his products are part of the solution for getting Americans MOVING and moving WELL.


I hope you find benefit in Army's work and products--I know I have and so has my own family.  In Health, Coach RJ